The  english physicist, mathematician and astronomer Sir Isaac Newton (1642-1727), basen on the studies of Galileo and Descartes, published in 1684 the first great work in Physics: Philosophiæ Naturalis Principia Mathematica, also known as Principia. In the first of the three parts in which the work is divided, he exposes in three laws of motion the relations between forces and their dynamic effects: the laws of motion.

Newton´s third Law or action and reaction principle establishes that for every action force, there is an equal and opposite reaction force. We will go in deph through the following three points:

Imagine several marbles, all of them with the same mass. When you throw a marble against another, probably the first one will stop and the second one will get a very similar velocity than the first marble had.

On the left, the blue marble goes at velocity . On the right, the blue marble remains still after hitting the red marble, of equal mass than the first one. The red, then, is set in motion at a very similar velocity to that the blue one had, .

From this simple example, you can verify that, for both marbles to modify their velocity have had to go through to forces. Since we can suppose marbles are isolated (they don´t interact with any other element), forces have only appeared during the blow. It seems a force over the hit marble has appeared during this action, which makes it set in motion. Therefore, it seems clearly that, since the "hitting" marble stops, it must experiment a reaction with a similar force but opposite direction.

We can now give a definition for Newton´s third law.

When a body A exert a force on another body B. B will react exerting another force on A with equal magnitude and opposite direction. The first of the forces recieves the name of action force  and the second reaction force where:

Some important observations are that:

A couple consists of two parallel forces that are equal in magnitude, opposite in sense and do not share a line of action.

Can you say what does a ball on a table interact with and where the forces are exerted at each interaction?

Your day to day is full of examples where you use the action-reaction principle to get on well in your environment. In the subject Newton´s law applications we will study many of these examples, we start here with some of them, though:

When you are standing up, the Earth applies an attraction over you, but... why don´t you sink? Due to the reaction of the ground. It has equal value and opposite direction. As it is reflected on the following figure, we can distinguish: 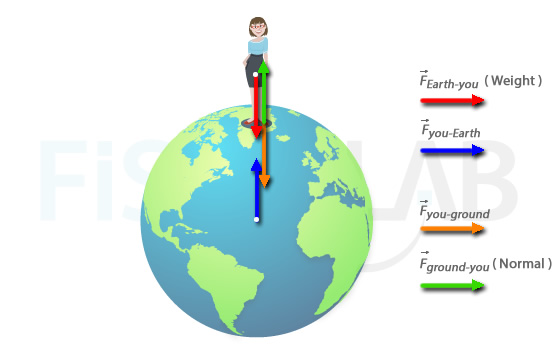 Diagram of action and reaction forces

TODOThe figure shows the forces exerted on the arth and on you when standing up. The first couple action-reaction is formedLa figura muestra las fuerzas que aparecen sobre la Tierra y sobre ti cuando permanece de pié. El primer par acción-reacción está formado por F-Earth-you and F you-Earth. They are action at a distance forces. On the other hand, there is the couple action-reaction formed by F ground-you and F you-ground. They are forces of action by contact.TODO

When you walk, and thanks to the frictional force, you "propel the Earth backwards". The reaction of the Earth on your feet is to propel them forward. 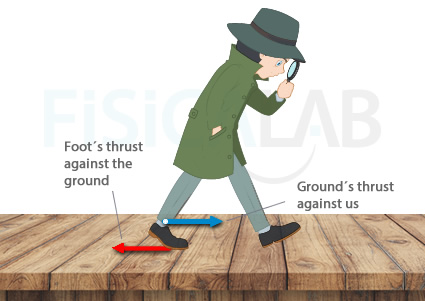 Even though our detective is looking for a clue everywhere, he has the answer closer than he thinks. It is the push he exerts on the ground the one that causes a force on it, in red, whose reaction on the detective, in blue, is the responsible of his shift.

In the starting line the athletes use the track to propel themselves. They do it by exerting a force against the track, so the reaction of it gives them the drive desired. 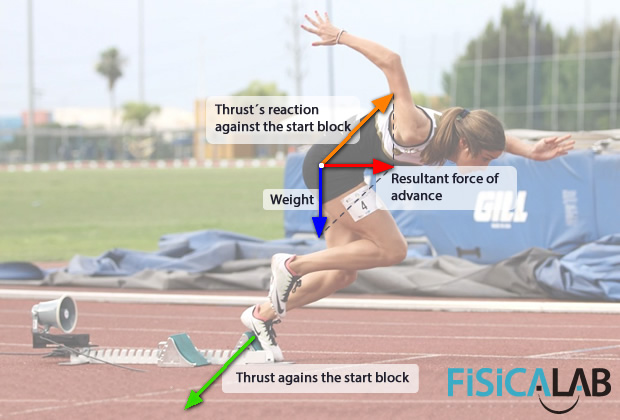 In the start line, athletes uses the start block to launch themselves and counter their own weight, assisting the advance force in the most horizontal way possible, being the good relation between the weight and muscular performance essential for the athletic training.

On the same way, when you swim you move the water backwards, because of this, the water pushes you forward. When you get to the end of the pool and you want to turn around, you will probably propel yourself hard with your feet against the wall. The reaction of the wall on your feet is what let you to "gather momentum". 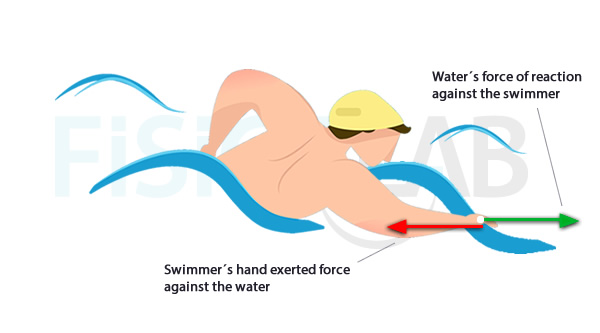 When you swim, your hands, and also your feet, exert a force on the water, in red, whose reaction, in green, propels you forward.  The rest of your body must be set in the way it opposes the least water resistance possible, for this advance is as fastest and comfortable as possible.

To kick a ball

When you play football and kick the ball, it´s the force on the ball the one that makes the ball to be shot off. This, at the same time, exert a reaction force on your foot that it will make the foot to go backwads from the impact spot. 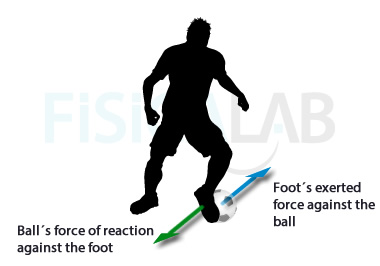 The action force, in blue, and reaction, in green, make the ball to be shot off possible. What the "king of sports" would be without those forces?

Contents of Newton´s Third Law are closely related to: