Forces and its Effects

In physics, a force is any interaction that, when unopposed, will change the motion of an object or its shape. In this section we are going to develop this idea which is, for instance, realated to the technology we use to travel by bike or car, but also, behind the everyday actions such as pushing the shopping trolley. In order to do this we will study:

Are you ready for it?

Imagine pushing a resting ball on a pool table with yor finger. Probably your intuition tells you that you are giving “strength” to the ball. In a more formal way we can say that we are applying a force to the ball. What happens next? Most likely our ball starts moving, but if it were a water balloon instead, it could happen that it deformed and our finger was "swallowed" by the balloon. 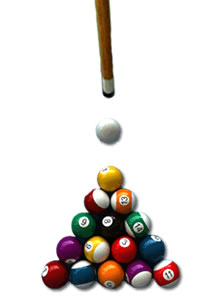 When a pool game starts, you apply a force on the white ball by using the cue. This force ends up spreading to the rest of balls, initially on repose, setting them all in motion.

We define force as any interaction that, when unopposed, will change the motion of an object, or, will cause a deformation on it. A force is the interaction of a body with something external to it, as well as a vector characterised by magnitude (size) and direction.

The unit of the International System of measure is the Newton (N). One newton is the force required to cause a mass of one kilogram (kg) to accelerate at a rate of one meter per second squared (m/s2) in the absence of other force-producing effects.

Historically the study of bodies in motion and its cause has fascinated mankind since ancient times. Aristotle (284 – 322 a.C.), one of the most important wise men from Ancient Greek, he was one the forefathers of this study, his ideas were maintained during the whole Middle Ages. Then, Galileo Galilei (1564 – 1642) was able to describe motion mathematically (Principal of Relativity) but he did not analyse the causes of it. Years later Isaac Newton (1643 – 1727) was who, based on Galileo ́s ideas, define the causes of motion: forces.

Other units of measurement

Beside Newton, there are other units of measure less used:

Previously, we have defined force as a vector magnitude, so they are represented as vectors. Indeed, as you can observe on the next image, the direction of the force has to be into account in order to predict its effects. 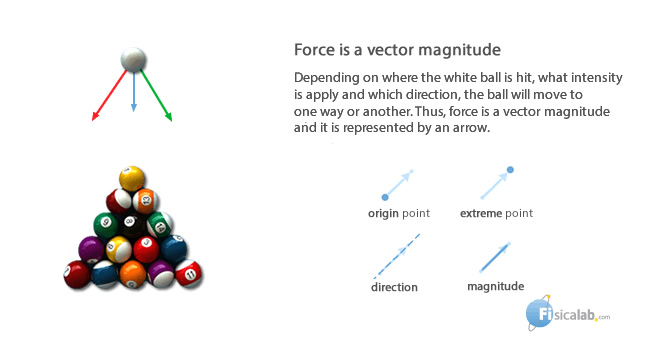 Observe that one of the forces characteristics has been the initial point, also known as point of application. It is the point where force is applied,  so the effects it produces , on a body may vary depending on it. In any case, on this level we will focus on punctual objects, so, applying a force to a body it is to apply it on its only point.

On the other hand, forces as vectors may be decomposed. This will let us, for instance, to observe the effects produced in space in each dimension (axis) separatly.

Effects of the force

Forces appear from interactions between bodies. Watch the next image.

Remember, every interaction leads to a couple of forces. This principle is known as law of action and reaction.

According to the distance of interaction between bodies we can distinguish two types:

Furthermore, the effects produced by the forces can be summarised in two kinds:

Newton ́s second lawENLACE states that the acceleration of an object is dependent upon two variables - the net force acting upon the object and the mass of the object.

Contents of Forces and its Effects are closely related to: