Conservation of momentum principle, also known as conservation of quantity of motion, establishes that the resultant of the forces acting on a body or system is void, its linear momentum remains constant in time. 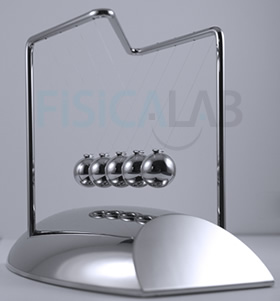 Newton´s cradle, also known as Newton´s pendulum, it ilustrates the conservation of momentum in absence of external forces.

Think of two bodies isolated, A and B, with just one interaction between them. According to the action - reaction principle:

This expression tells us the variation of the sum of the momentums is void, thus the total linear momentum of both bodies remains constant:

We have already explained in several occasions that, in mathematical language, when a magnitude remains constant in time has a derivative equal to zero in relation to that one. So, in this case we may write:

In physics we say that an isolated system is the one with no interaction with the outside, thus it is not subdue to external forces in relation to it. Particles taking part in crashes, explosions, reaction engines, etc, can be consider isolated systems in which external forces may be disregard opposite to the intensity of the inner ones. Conservation of momentum principle has an important aplication in the study of those phenomenoms, when we don´t know the causes that originate them, since, before and after the phenomenom of linear momentum of the whole system...

A competitor shoots a plate by using a rifle of 2,5 Kg on a skeet shooting competition. Knowing that the ball is 23 g and it is shot horizontally at 350 m/s, what is the recoil of the rifle?

As we saw in the previous demonstration, we can consider the conservation of momentum principle as a direct consequence of the Newton´s third law. Therefore, if we apply it on a body whose mass does not vary, it is equivalent to the Newton´s first law:

Contents of Momentum Conservation Principle are closely related to: