Impulse is the magnitude we use in dynamics to relate the force applied on a body to the time the force has been applied. It let us understand, for example, the mechanism of takeoff of the space shuttles, but also why football players put the ball behind their heads for the throw-in. In this chapter we are going to study it through the following points:

Have you ever ask yourself, why football players put the ball behind their heads to throw-in? That gesture does not increase considerably the value of the force to throw the ball but, however, it will let the players to exert the same force during more time. Players do what we know as gather momentum. 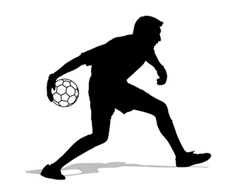 Goalkeeper giving impulse to a ball

The goalkeeper moves the arm backwards as much as possible to start a movement forward it let him to apply the force on the ball for longer. This will make the ball to get further.

impulse is the magnitude that let us quantify those ideas. Let´s define it formally.

Impulse   is a vector magnitude that relates the force to the time its action takes.

Observe that, from the previous definition we can deduce that the impulse vector of a force possess the same direction than the force to which it´s associated.

Taking into account that the variation of linear momentum can be related to the resultant force acting on a body according to:

The product is the own definition we have given for the impulse, so that is related to the variation of the linear momentum of the body. It is the impulse-momentum theorem.

Impulse-momentum theorem  establishes that the impulse of the resultant force acting on a body is equal to the variation of its linear momentum:

Observe that the previous expression brings to light the statement we did about that by giving a determined velocity to a body (to increase its linear momentum) we can act in two ways: by acting over the force or acting over the time on which it acts. So, in the space shuttles the ship get the desired speed due to the continuous effect of the force the motor drive provides.

They are closely related though, you should not confuse the linear momentum with the impulse. Impulse can be related to the variation of the first one, but they are magnitudes conceptually different.

It is normal to get confused. Bear in mind that their ecuations and dimensions are the same...

A 1kg body is subjected to a single force  for 5s. If we know that its initial velocity is . Calculate:

b)Linear momentum before and after the force is exerted.

So the impulse transferred during a finite time interval is obtained adding the finite diferential impulses by integrating:

Regarding the impulse theorem, we can get to the same statement already introduced for constant forces, considering this time as variable forces. In order to check it we must consider the differential version of the Newton´s second Law, that is . So:

Probably you know now that the defined integral between two values of a function coincides numerically in value with the area set under that function. So, if we represent in the horizontal axis the time, and, the force in the vertical axis, either constant or variable, the area of the curve between  ti and tf coincides with the value of the impulse: 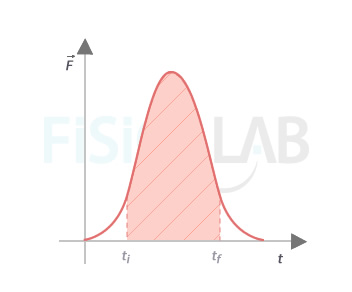 In the chart it is represented how the force acting on a body varies in time. The area locked under the curve between the instants ti and tf, in red, coincides numerically with the value of the impulse of that force in the interval tf - ti,  thus it coincides with the value of the variation of the linear momentum the body on which that interval will be applied is going to experience.

From this idea, watch that it is always possible to find an average constant force whose value of impulse in that time interval coincides with the one of the variable force. 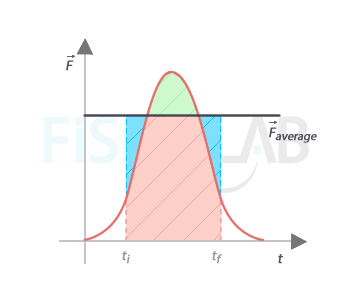 Thus, most of the times on this level, when we talk about impulse force we are referring to that same assumed average constant force.

Contents of Impulse are closely related to: