The everyday concept of velocity arises when we consider how quick or slow a body is moving. Somehow we relate the displacement of the body with the time invested in it. In this section, we are going to specify what is physical velocity, also known as instantaneous velocity, or simply, velocity. To understand this well, we recommend that you previously read the paragraph in which we present average velocity.

Instantaneous velocity, or simply velocity, is defined as the limit of the average velocity when the time change approaches zero. It is also defined as the derivative of the position vector with respect to time. Its expression is given by:

Velocity is a vector magnitude. Its dimensional equation is given by [v]=[L][T]-1

How is the expression of the instantaneous velocity obtained?

To define the concept of instantaneous velocity with precision we start with the concept of average velocity, which we have already studied, and we are going to help ourselves with the graph in the figure.

The procedure to define the instantaneous velocity or, simply, the velocity of a body at a point A, consists in calculating the average velocity between A and a point as close to A as possible. This is the same as calculating the average velocity in an interval of time as small as possible. In the graph, you can see the position vector of the point A and of the rest of points B, C and D. These are  ,   ,   and   respectively. The displacement vectors between A and each of the points B, C and D are also represented. These are  ,   ,   and   respectively. As you can see in the above graph, as the second point gets closer to A the displacement vector get closer to becoming tangent to the trajectory at point A and its magnitude approaches the value of the distance traveled over the trajectory.

Experiment and Learn
Proximity of the distance traveled and the displacement

The graph shows the trajectory followed by a body and its position at two different times.

Drag both positions and observe the values of the displacement and of distance traveled.

What happens when they are very close? The distance traveled is practically equal to the magnitude of the displacement vector. In particular, if the elapsed time between the two positions approaches 0, these become exactly the same. This approximation is what is used to calculate the velocity in a moment in time.

It is more common to find the velocity vector written by means of its Cartesian components resulting in:

It is also possible that, like with any other vector, you will find it written as a function of its magnitude. To do this, simply multiply the magnitude of the velocity vector by the unit vector with the same direction as  , and that we will call   because it is tangent to the trajectory.

As you can see, the instantaneous velocity is a vector magnitude that satisfies the following: 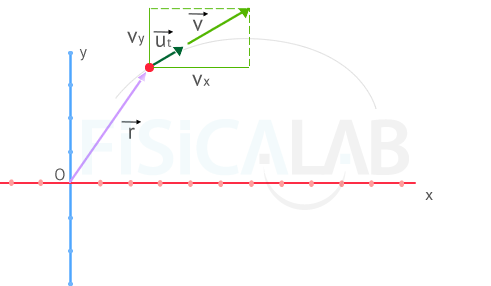 Cartesian components of the velocity vector

In this section, we have defined the concept of instantaneous velocity based on average velocity, we have studied its magnitude and its direction. Even though we have considered different points of view and different expressions for the velocity vector and its magnitude, normally, you will calculate the velocity as the derivative of the position vector with respect to time.

If a body moves according to the following equation:

Contents of Instantaneous Velocity are closely related to: