To study these effects more clearly, we use an instrinsic coordinate system for every point of the trajectory, as you can see in the figure. 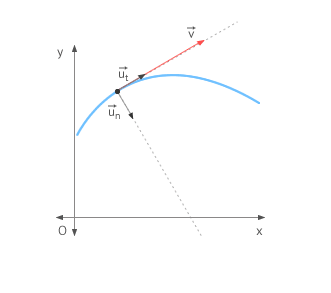 The intrinsic coordinate system for each point of the trajectory is defined as a system of reference formed by two axes:

This reference system is used to "observe" the changes in the magnitude and direction of the velocity vector.

The acceleration as a function of its components can be expressed in the following way:

As you can see in the following figure, since the axes are perpendicular to each other, the magnitude of the acceleration can be calculated as:

They are obtained by breaking down of the acceleration vector in two vectors, each located on one axis of the intrinsic system of reference. Regardless of whether the motion is in two or three dimensions there is only two intrinsic components

Contents of Intrinsic Components of Acceleration are closely related to: