A projectile is any object that once launched or dropped continues in motion by its own inertia and is influenced only by the downward force of gravity.

Projectile motion, also known as parabolic motion, is an example of composition of motion in two dimensions: an u.r.m. on the horizontal axis and a u.a.r.m. on the vertical axis. In this section, we will study:

Projectile motion, also known as parabolic motion, consists in launching a body with a velocity that form an angle α with the horizontal. In the following figure, you can see a representation of the situation. 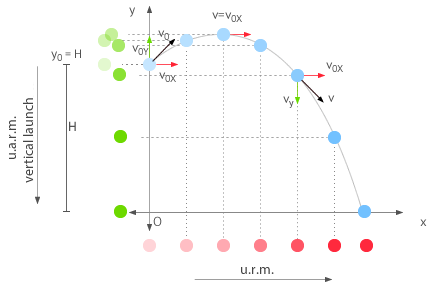 This motion is characteristic of projectiles, moving objects being affected only by gravity. On the x-axis, the body moves at constant velocity v0x (u.r.m.) and in the y-axis with constant acceleration due to gravity (u.a.r.m.).
It is characterized by the fact that at the highest point of the trajectory, the velocity of the body is always v0x (there is no vy).

The equations for projectile motion are:

Since, as we said above, the velocity forms an angle α with the horizontal, the x and y components are determined using the most common trigonometric relationships:

Decomposition of the velocity vector

Any vector, including the velocity, can be broken down is in 2 vectors, vx and vy, that have the same directions as the Cartesian axes. The magnitude of both vectors can be calculated from the angle that the vector forms with the horizontal through the expressions shown in the figure.

Finally, taking into consideration the above said, that y0 = H , x0 = 0, and that ay = -g , , we can rewrite the formulas as are shown in the following list. These are the final expressions for calculating kinematics magnitudes in projectile motion or parabolic motion:

The blue ball in the figure represents a body suspended above the ground. You can drag it to the initial height H that you want and select the initial velocity (v0) with which it will be launched at an angle (α) with the horizontal. The gray line represents the trajectory that it will travel based on the values you have selected.

Then press the play button. Drag the time and observe as the position (x and y) and velocity (vx and vy) is calculated for each instant of its descent to the ground.

Verify that the projection on the y-axis (green) describes a vertical launch motion and on the x-axis (red) it describes a uniform rectilinear motion.

Equation of position and trajectory in projectile motion

The equation of position of a body helps us to know at what point it is at each instant of time. In the case of a body moving in two dimensions, remember that, generically, it is described by:

The equation of position of the projectile motion is given by:

On the other hand, to know which trajectory the body follows, that is, its equation of trajectory, we can combine the above equations to eliminate t, getting:

As expected, this is the equation of a parabola.

On the other hand, frequently in exercises, you would be asked for some of the following values.

It is calculated for y = 0, the vertical component of the position. That is, the flight time is the time required for the height to become 0 (the projectile reaches the ground).

It is the maximum horizontal distance, from the starting point of the motion to the point in which the body hits the ground. Once the strong>flight time is obtained, simply substitute in the equation of position of the horizontal component.

Angle of the trajectory

The angle of the trajectory in a given point is the same as the angle that the velocity vector form with the horizontal at that point. To calculate it, we get the components vx and vy and from the trigonometric definition of the tangent of an angle, we calculate α:

Minute 90 of the game... Lopera approaches the ball to make a direct free kick 40 meters from the goal, takes two steps back and kiiicks. The ball takes off at an elevation of 20°... and GOOOOALLL!!! GOOOOOOOALLL!!!! The ball goes in through the top corner at a height of 1.70 m!!!. After hearing this radio broadcast, can you answer the following questions?

a) From Lopera’s kick to scoring the goal, how long did it take? and what was the initial velocity of the ball at the moment of the kick?
b) What is the maximum height reached by the ball?
c) How fast was the ball going when it reached the goal?

Contents of Projectile Motion are closely related to: