Normal or centripetal acceleration measures the changes in the direction of the velocity with time. It is given by the expression:

Normal acceleration can be:

Notice that any trajectory described by a body can be considered as a combination of straight and curved trajectories. The curved portions of the trajectory may also be considered circumference arcs. The following image illustrates this concept 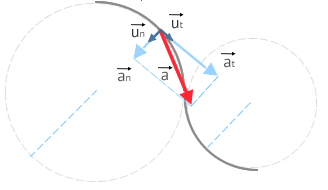 Intrinsic components of the acceleration

Where we have applied the derivative of a product rule D(ab)=a'b+ab'.

We see that the second term is the product of the magnitude of the velocity and the derivative of   with respect to time. We can demonstrate that this vector is, actually, normal to the path: 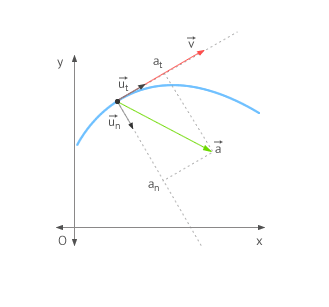 The framed term corresponds to the normal or centripetal acceleration and it is responsible for the change of direction of the velocity over time.

Contents of Normal or Centripetal Acceleration are closely related to: