Angular quantities, also known as angular magnitudes,  as its name suggests, are related to angles. Among other things they allow us to study circular motion. In this section, we are going to present you the main ones. We will see:

The International System (S.I.) unit for measuring angles is the radian (rad). A circumference is 2π radian. Contrariwise, we can also measure angles in degrees. A circle has 360 degrees. Considering the previous relationship, to convert degrees to radians, you can use the following expression:

Converts the following angles from radians to degrees or degrees to radians:

The angular position φ is a fundamental angular magnitude which represents the angle that the position vector of a body forms with the positive side of the x-axis or positive x-semiaxis. Its unit in the International System (SI) is the radian (rad). 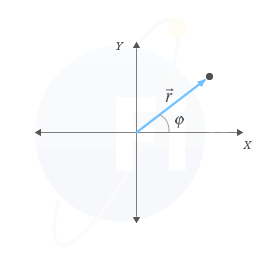 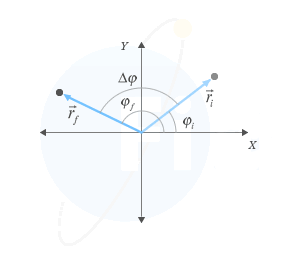 It represents the angular displacement (Δφ) experienced by a body each second. Its unit in the International System (SI) is the rad/sec although sometimes you will see that you can also use revolutions per minutes, rpm (1 r.p.m. = 2π/60 rad/s). As it happened with velocity, there is an average angular velocity ωa and an instantaneous angular velocity ω (or simply angular velocity) according to the time considered, whether a time interval Δt or an instant of time dt, respectively.

Although it is not an angular magnitude properly speaking, because it is not measured in angular units, it is important to remember here the expression for normal or centripetal acceleration.

Remember that normal or centripetal acceleration is responsible for the change of direction of the velocity vector so it appears in all circular motions.

Relationship between Angular and Linear Quantities

We can relate angular and linear quantities in circular motions using the radius R.

So far we have studied the angular quantities as scalars. In reality, they are vector magnitudes, but for the purposes of this level, we will consider them scalars. However, here we anticipate the relationship of linear velocity with angular velocity and tangential acceleration with angular acceleration, in vector form, which is given by the vector product:

Contents of Angular Quantities are closely related to: