The Linear momentum, quantity of motion, or simply, momentum, is the magnitude used in dynamics to characterize the bodies, relating their mass and their velocity. On this chapter we will study:

We are about to start...

Imagine for one second that you are on a dead end - corridor in a supermarket and two shopping carts are coming to you, one of them has a fridge inside it and the other one has a small tuna can, both are coming at the same speed. You could think... "I jump it" or "I climb a shelf", but imagine that you only can stop one of them. Which one would you stop? Most likely you will try to stop the one with the can inside. Your common sense says despite the speed is the same, it is easier to stop a shopping cart containing less mass.

Let´s continue imagining! What would happen if the shopping cart with the tuna can is going at a much higher speed than the other one with the fridge? The decision gets complicated...

If you think hard, the speed is not enough to characterize the motion of a body since the mass also affects. Thanks to the linear momentum or momentum, we will be able to help you to decide what shopping cart to stop without injuring you and why. 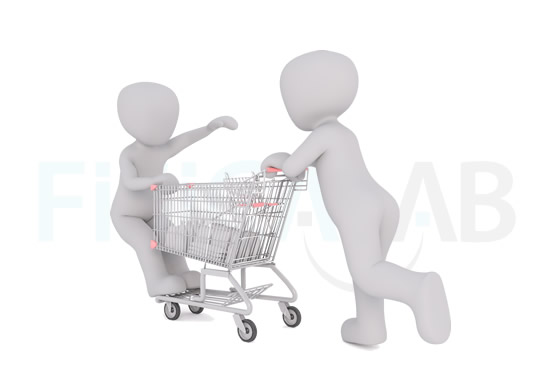 Influence of the mass in the momentum

When you push a shopping cart you can see how as you increase its mass putting the items in it, the cart becomes harder to manage. if also, someone is on you are going to make an extra effort to not to crash into somebody else, since any crash would cause a higher damage. The linear momentum is the responsible.

Momentum of a particle

Momentum, linear momentum  or quantity of motion, is a vectorial magnitude that relates the mass and velocity of a body as follows:

In the figure you can see, in blue, the trajectory described by a car. In green, the vector velocity is tangent to the trajectory at each point. The vector quantity of motion, in pink, has the same direction than the velocity but different module.

You must not get mixed up the linear momentum of a body, either a particle, to the moment of a force.

Linear momentum of a system of particles

When we want to study several particles or bodies as they were one, we can say that all of them are a system of particles.

Linear momentum or quantity of motion of a system made by n particles is the sum of the linear momentums of each of them.

On a given instant of time, a rocket has a velocity of  . Knowing that its mass is 2kg. What is the momentum on that instant?

Linear Momentum and Laws of Newton

The phisician, mathematician and english astronomer Sir Isaac Newton (1642 - 1727), based on the studies of Galileo and Descartes, he inspired enormously the study of motion and its causes. We owe him the famous "Newton´s Laws", and the introduction of the concept of quantity of motion. As we will see on following chapters, the linear momentum is closely related to th the two first laws of Newton, in particular to:

Thus, both can be explain in relation to the posible variation of the linear momentum of a body or system.

To this point, do you remember our shopping cart, the tuna can and the fridge? We guess that you are starting to feel (from the point of view of physics) which cart is more convinient to stop.When the crash takes place, the one with less quantity of motion will hurt you less. In fact the linear momentum is a concept of great importance in physics, since it is a quantity that is kept in closed systems that interact to each other exclusively. From this simple idea we can predict what happen on this circumstances, for instance in crashes or explosions, but it is also possible to deduce the initial state of bodies had when what we know are the results of the interaction.

Contents of Linear Momentum are closely related to: